Membership is granted to those attending the ion channel meeting. The meeting organizing committee is renewed by half every year, each member being elected by a general assembly for two years. Members cannot be re-elected, except for the board. Each year, newly elected members are in charge of the organization of the five symposia of the meeting, and invite speakers who are international leaders in their field. Older members organize the sponsoring and the logistics.

A platform to share scientific ideas, which reflect the diversity of experimental approaches used to study ion channels… 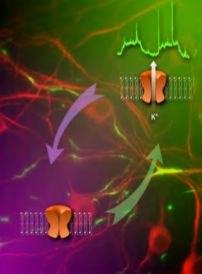 Ion channels are membrane proteins found in the cells of all organisms, e.g., bacteria, plants and animals. They enable the flow of ions across cell membranes. In humans, they are critical for various physiological functions of paramount importance, like the excitability of nerve and muscle cells, hormone release, cell division and apoptosis. Their dysfunction is involved in numerous major pathologies, such as epilepsy, pain, myopathy, cancers, cystic fibrosis or cardiovascular and neurodegenerative diseases.

A large spectrum of experimental approaches is used to study these proteins, their physiological roles and their involvement in a variety of pathologies, ranging from biochemistry and structural biology to pharmacology, genetics and in vivo techniques (e.g., behavioural tests and optogenetics). Given their fundamental role in the biology of all organisms, a series of Nobel prizes has been awarded to researchers investigating ion channels. This is the case for the invention of electrophysiology techniques that allow the recording of ion channels’ activity (Nobel prize in Medicine awarded to Erwin Neher and Bert Sakmann in 1991), and the breakthrough of solving the atomic structure of potassium channels (Nobel prize in Chemistry awarded to Roderick MacKinnon in 2003). More recently, the discovery of ivermectin by William Campbell and Satoshi Omura earned them the Nobel prize in Medicine in 2015: this drug targets ion channels from parasitic nematodes to cure helminthic diseases.